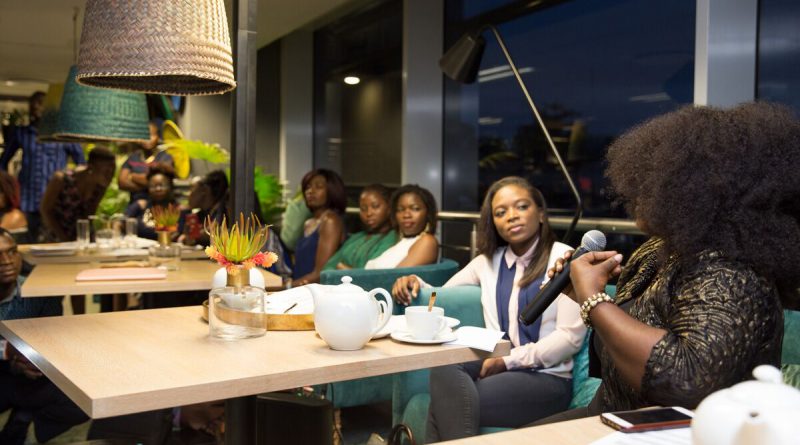 In early Fall 2017, the husband of Ghanaian entertainer Afia Schwarzenegger uploaded videos of what appeared to be Schwarzenegger engaging in an extramarital affair. Ghana’s digital publics swiftly demonized her. That September, several women used the hashtag #MenAreTheirOwnEnemies to expose the misogyny pervading media coverage of the Schwarzenegger affair. Regardless of the facts of the matter—which were disputed by several people involved—the women of #MenAreTheirOwnEnemies shared alternative narratives of the event online to provoke discourse around the question: how would the public react if a man had been caught cheating by his wife, rather than the other way around?

In a matter of weeks, this group of seven women organized themselves as #PepperDemMinistries (PDM) to “put gender on Ghana’s agenda” by disrupting prevailing norms that favor patriarchal power in Ghanaian society and educating the public on feminism. In the words of PDM, their modus operandi is “flipping the script [on] toxic gender narratives.” As the group celebrates its first year of work, along with a following of nearly 20,000 on Facebook, PDM members continue to engage government bureaucrats, media personalities, and gender scholars in both physical and digital spaces to advance more conversations about feminism. What merits further analysis, though, is how PDM continues to build its audience by unapologetically claiming a hyperlocal identity. Instead of evangelizing universalistic feminism, PDM leadership draws from the privileges and obstacles that comes with their daily experiences as urban professional, millennial, Christian, Ghanaian women to trigger public dialogue on gender equality through social media.

This essay seeks to critically examine the ways in which PDM’s digital origins shape the ways the group cultivates, broadcasts, and reckons with its own dynamic feminist ideology in real time alongside a primarily West African, digital audience.

#PepperDemMinistries’ brand comes from several Ghanaian markers. The group’s logo is the local Adinkra symbol for pepper, a staple ingredient in Ghanaian cuisine. Mako, or pepper, has historically represented inequality and the uneven distribution of resources. “Mako is a shortened form of the Akan proverb, ‘Mako nyinaa mpatu mmere,’ literally ‘All peppers (presumably on the same tree) do not ripen simultaneously.’” The proverb operates as a call to action for those able to help the less fortunate. For PDM, pepper becomes a metaphor for truth, a truth that might be uncomfortable, but leads to greater societal consciousness and can thus cause societal change.

The “Dem” of #PepperDemMinistries originally referred to a pidgin English transliteration of “them,” as in PDM “throws pepper” or raises truth in the face of detractors who seek to preserve patriarchal power structures in Ghanaian society, but PDM leadership has also linked “Dem” to democracy. PDM positions its advocacy work in constant dialogue with their broader communities and intersectional interests, thereby encouraging others to participate in these conversations on gender.

Finally, the “Ministries” label reflects how PDM group members envision their work as a kind of ministry or call to duty. It also pokes fun at the proliferation of mega-churches in Ghana and how pastors leverage their platforms “to portray women as the ‘weaker sex’ emotionally and intellectually, who need protection and guidance… re-inscribing male domination and undermining female autonomy.” In this sense, PDM does not separate its advocacy from the prevailing cultural context and the localized feminisms this context produces.

The group invokes “motherism” to trigger conversations on unlearning narratives of gender inequity. Motherism venerates the role of mothers and mother-like figures as those of authority. This reflects matrilineal social structures that governed many Ghanaian societies before the onset of European colonization. In this sense, the reach of matriarchal authority extends beyond a nuclear family household; it extends across the community.[1] The matriarch empowers her community to work for the benefit of one another. Stated another way, the welfare of the individual is inextricably linked to the welfare of the community, and vice-versa. Motherism fuses notions of community and individual as two components of a larger identity. Simultaneously, motherism activates another African philosophy, “Ubuntu,” encapsulated by the phrase: “I am because we are, since we are, therefore I am.”[2]

Motherism and Ubuntu do not reject gendered hierarchies in Ghanaian society; rather, they work concomitantly rejecting elements of western feminism that exclusively define the home as a site of anti-woman subjugation. Western feminist ideologies, particularly those stemming from the mid-twentieth century, focus on the rejection of traditional societal expectations for women like marriage, motherhood, and homemaking.[3] These roles, after all, may confine women to the domestic sphere, at the expense of realizing their full sense of self and potential.[4] However, this perspective has led to ideological clashes between Western and African scholars. According to Nigerian gender scholar, Oyenroke Oyewumi:

“African feminism argues that western feminism is not adaptable for African women because traditional feminism sees these women as subjugated, uneducated and oppressed individuals. In a simplified way western feminism does not see third world women as ‘free,’ not while judged by their standards.”[5]

As a result, African feminists combat multiple systems of social dominance: patriarchy and imperialism. Imperialism, in the context of this essay, is interpreted as the domination of certain logics of identity and power suitable to colonizing powers over the lived experiences of those formerly colonized. Through empire, European powers reinforced familiar gender hierarchies along racial lines. Per sociologist Dr. Desiree Lewis, “Gender hegemony benefits from race and class hegemony when the gender practices of subordinate race and class groups are defined as problematic or deviant in order to reify and legitimate the ideal quality content for femininity and masculinity…. [which ultimately] serve dominant class and race interests.”[6]

Where does PDM situate itself in this ongoing debate?

PDM uses motherism and “Ubuntu” philosophies to make explicit how patriarchal power often transforms homemaking and marriage as sites of subjugation without advocating for a complete rejection of these institutions. According to PDM leadership, “Individual women, the collective and the family, is the crux of all gender politics. Economics, society, and culture merely impinge on them. Plus, marriages are not practised (sic.) by people in isolation of the culture or society.”[7]

By focusing on the domestic sphere as a site of resistance, PDM complicates the aforementioned divides between Eurocentric and Afrocentric ideologies. Additionally, PDM makes raising feminist consciousness more accessible to the masses by posting content across cyberspaces. And the humorous and witty tones pervading PDM’s posts operate to further expand their accessibility. In the context of digital globalization in the twenty-first century, cyberspace allows groups like PDM to compress both space and time to forge linkages with transnational feminist mobilizations, all while staying grounded by local feminist ideologies.

Playing With Scale Across Cyberspaces

From radio to video to written posts on Facebook and Twitter, PDM’s agile use of multimedia across cyberspaces makes their work more tangible to their audience. By rendering gender inequities more visible to an increasingly digital Ghanaian public, “social media’s openness and accessibility help show the links between the personal and the collective, and the local and the global that are not easily discernible otherwise.”

These conversations, advocacy, events—all of the “pepper”—take place in full view of PDM’s audience. In this manner, PDM puts into operation a kind of horizontally-integrated feminism that is less interested in promoting a single cause than promoting a kind of mindset shift.[8] Gender should be reframed as a lens through which society should engage and interrogate their lived experiences. In this manner, feminism quite literally meets stakeholders where they are, and prompts a timely application of feminist ideology into the minutia of everyday life. Ultimately, this reframing of gender as a social lens rather than issue area fosters a kind of democratic feedback loop between PDM leadership and its audience.

As a result, PDM’s social media advocacy does not merely “show the links between the personal and the collective,” it also bridges the digital and the tangible by fostering dialogue on and offline. PDM collaborated with international organizations like the African Women’s Development Fund to put on the panel event: “Time is Now: Intergenerational Conversations on the Evolution of the Feminist Movement in Ghana,” which commemorated International Women’s Day 2018 by bringing together both established and emerging voices in Ghanaian feminism.

While Ghana has arguably been an incubator for pioneers charting new Africa-focused, feminist spaces, many of these pioneers are academics who have spent their careers building credentials across both Ghanaian and Western universities. Nearly a third of panelists who partook in the “Time is Now” intergenerational discussions were academics. Per University of Ghana, Legon PhD. candidate in international affairs Mme. Titilope Ajayi:

“It is noteworthy that a group that emerged with no visible connections to Ghana’s feminist history engaged at least two other generations in frank conversation that laid bare the many facets of Ghanaian womanhood as well as the symmetries, disjunctures, gaps and opportunities for pan-generational feminist organising (sic.) in Ghana.” [10]

PDM intentionally creates this space for younger voices to showcase their work devising feminist ideology through digital engagement. And across these cyberspaces, PDM can also shine light on global connections. The “Time is Now” title arguably situates this event in a larger body of work spanning the Atlantic to include the US-based “Time’s Up” movement.

PDM also leverages its cyberpresence to build feminist collectives across the African continent, all while honoring local feminist paradigms like motherism and Ubuntu. In late 2018, PDM members posted about the Rwanda-based ‘Bandebereho’ program. Translated from the Kinyarwanda phrase for ‘role model,’ this program offers classes to men on domestic roles, “everything from cooking and cleaning to discussions on how to challenge traditional gender roles,” in efforts to curb instances of domestic violence.” Per program records, participating communities have witnessed sharp declines in domestic violence incidents, as well as spikes in women-led entrepreneurship. PDM makes clear how principles from motherism can demonstrate to its digital audience how work in the domestic sphere is central to the stability of both the family unit and the broader community. By demonstrating the importance of this work to father-figures in the household, women may more actively negotiate how they distribute labor between family members, which, as seen in the data, may include entrepreneurship. In these cases, women are not necessarily abandoning their role as homemakers for, say, full-time employment; rather, they are restructuring their roles within and outside of the home in order to realize their full potential as they see fit. As a result, Rwandan women who were previously victims of domestic violence become empowered to define their own agency and feminism.

PDM has built among the largest feminist mobilizations in Ghana today, and group leaders have done so by owning their unique identities at the intersection of nationhood, class, race, culture, and gender. PDM does not strive to achieve some universalistic feminist standing in the way they conduct their practice; rather, they deconstruct feminism as a constantly shifting process between group leadership, audience, and policy-making bodies. Even when its message circulates worldwide across cyberspace, PDM’s work remains grounded in distinctly local paradigms of feminism and social location, particularly “motherism” and “ubuntu.” It has built a kind of digital, democratic practice of feminism, its work always in dialogue instantaneously with its growing audience.