Home > Op-Eds and Commentaries > The Invisible Work of Girls: Inside the Life of Female Child Labor in Ghana 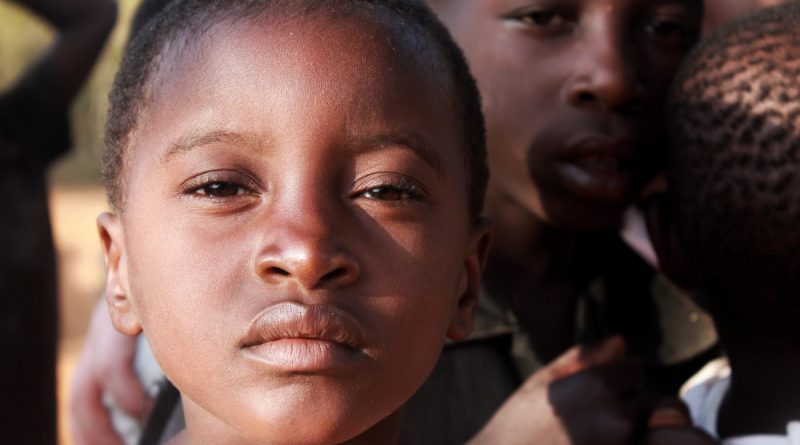 Op-Eds and Commentaries
January 21, 2020January 20, 2020 2330 Views Africa, child labor, Ghana
Zaina Adamu
Zaina is the Executive Director of Ghana Girl Rising (ghanagirlrising.com), a social enterprise aimed at getting young Ghanaian women off the streets and into the classroom. The former CNN journalist, previously based in New York, Baltimore and Atlanta, now lives in Accra where she covers human rights and gender equality.

*The names of the subjects in this article have been changed to protect their identity.

A heavy stench of sewage permeates the air where 11-year-old Amina roams in search of change. With tattered sandals and stained clothing nearly sliding off her frail frame, she entertains herself by kicking dust on a busy, trash-filled street corner in Ghana’s capital city, Accra. When traffic comes to a halt, Amina saunters from car to car, raising her right hand to her mouth, signaling she wants food. In her other hand, she waves four paintbrushes being sold for one cedi each (approximately 18 cents). She has one goal: to survive.

At first glance, Amina appears satisfied with her surroundings. She laughs with other child beggars in between occasional bouts of dejection when she is refused change. When asked if she is happy with her surroundings, she demurely nods yes. “Are you sure you are happy?” Amina is asked again in Hausa, a Chadic language spoken in West and Central Africa. Suddenly her shoulders drop. Her bright eyes – now bleak – break eye contact. “No,” she responds.

According to Amina’s mother, Bilkisu, she and her three daughters fled Niger after her husband was brutally murdered four years ago. Shortly after his death, she decided to migrate to Ghana, enthusiastic about the fresh start her family desperately needed. But her optimism waned within weeks. Without work and no family to help, Bilkisu resorted to begging for change on the streets. And because she was unable to fund an education nor provide caretaking services for her children, she brought them with her. They, too, were soon forced to beg.

Amina represents a troubling worldwide issue—millions of girls are pushed to become child laborers to care for themselves and their families. Begging too forms part of child labor, which according to the definition of the International Labour Organization (ILO) is, “work that deprives children of their childhood, their potential and their dignity, and that is harmful to physical and mental development.”

In a detailed study entitled “Begging for Change,” compiled by Anti-Slavery International, the world’s oldest human rights organization working to free people from all forms of slavery, it is not unusual to find children forced to beg due to their need to survive. Girls suffer greater risks, the report reads, because they are more vulnerable to sexual exploitation and other forms of abuse.

But another study, explains how Ghanaian parents consider their female children more “worthy” to beg for change: “I allow my daughter to beg because young females easily catch the sympathy of both adult men and women,” said a father who allows his eight-year-old daughter to beg on the streets of Kumasi, one of the largest metropolitan areas in Ghana. “The young girl is able to work according to the instructions given to her but the boys sometimes abandon the business to go and play soccer with their friends. So you see, it is always good to use female children than the male.”

Another parent, a 45-year-old mother of an eight-year-old daughter, explained that she has her child beg because “as you can see from her physical appearance, she looks slim and small like someone who has not eaten for days so she easily catches the attention and sympathy of the general public.”

Moreover, underage girls are often pushed to work over male siblings because, for example, parents may consider their female children’s education a poor investment, since they are expected to eventually marry and leave the household. In other instances, the girls are trained as domestic servants, another form of child labor seen as an acceptable form of employment. “Domestic work is among the least regulated of all occupations,” the report reads. “Working in the privacy of individual homes, child and domestic workers are often invisible to the outside world and thus particularly vulnerable to violence, exploitation and abuse.”

The ILO approximates that some 100 million girls are involved in child labor globally. Many of them have no access to education and work in hazardous conditions, which places their physical safety and mental health in peril. In addition to being susceptible to exploitation, they are exposed to serious illnesses and injuries, including accidents and exposure to extreme weather. On a psycho-social level, children stuck in hazardous working conditions carry long-term effects of deprived social interaction, loss of self-respect and self-confidence.

A day in Amina’s life

Almost seven days a week, Amina, her mother and sisters wake up at 5 a.m. and leave home in Sabo Zongo, a devastating, poverty-stricken neighborhood where most beggars in Accra live, and trek one hour to an area called 37, a central part of the city where many pedestrians frequent.

Once they arrive, they set up at their home base, a littered traffic island made of dry soil. Bilkisu lays a thin cotton bedsheet on the island, kneels to take a seat and rolls prayer beads between her fingers while her daughters get to work. If Amina and her sisters are lucky, they will make at least GH¢5 (about 91 cents) by the end of the day.

Their routine is similar to the monotonous task of most female beggars in the city. They begin knocking on car windows, sometimes clinging on the arms of passers-by who either ignore their requests for change or scold them in Twi, a Ghanaian local language.

When offered a bottled beverage or food, the children fight for scraps. When they do have the chance to eat, they eat plain, white rice or waakye, a local Ghanaian dish made of rice and black-eyed peas. Once they’re done eating, they get back to work.

“I would rather be home or go to school,” Amina mumbles as the day passed. “It doesn’t feel good when I am here.”

To combat female child labor, the Government of Ghana implemented the National Plan of Action against Child Labor (NPA 2009-2015), with the intent to “reduce the worst forms of child labor to the barest minimum by 2015.” Ghana’s Coordinated Programme of Economic and Social Development Policies (CPESDP, 2014-2020) signified an important step to end female child labor. And in partnership with the Ghana Shared Growth and Development Agenda (GSGDA II, 2014-2017), it should serve as an operational framework to enhance effective child development, protection, and to address the exorbitant levels of youth unemployment in the country.

Still, few reports are available on what specifically Ghana’s Ministry of Gender, Children and Social Protection has done to tackle child labor. At a press conference event in August, its Minister, Cynthia Mamle Morrison, acknowledged that “in our development journey as a nation, we cannot leave behind the vulnerable person by the wayside, and for that our vulnerable persons left behind is one too many.” But, Chris ­Mensah-Ankrah, Director of Research & Development at the Eban Centre for Human Trafficking Studies headquartered in Accra, believes the Minister’s remark is one repeated too many times with no related outcomes. If concrete measures are not implemented to eliminate female child labor, the damage could be irreparable, he forewarns, especially as child labor of many kinds can expose children to trafficking and other dangers.

The broad consensus is that the single, most definitive way to curtail child labor amongst Ghanaian girls in the long term is to expand and improve schooling. One report on Ghanaian child labor notes that, “providing schooling as an alternative to child labor is important not only for the individual children concerned, but also for society as a whole, as children who grow up compromised educationally by child labor are in a poor position to contribute to the country’s growth as adults.” The ILO recommends that government invest in the education of girls to break the cycle of poverty, a condition that drives minors into labor. Outside education, the ministries responsible for labor, finance, social affairs, women and children must all implement their policy efforts to eradicate child labor with “specific consideration to girls.”

In the near-term, social protection measures must be provided, including improved access to healthcare, school food programs and cash transfer programs – the resources needed to support vulnerable families with young children. Government spending must immediately be prioritized to benefit vulnerable households, and civil society programs must develop better accountability programs to identify child labor throughout the country.

One day ends, a new one awaits

At around 6 p.m., daylight begins to melt into dusk. After 12 hours of begging in the sun, Bilkisu, Amina, and her two sisters wrap up for the day and head home for rest. There is a notion in Ghana that the days come and go faster there than in other parts of the world. But for Amina, who would like to become a doctor one day, time is even more precious—each passing day presents her with a world of challenges that could further derail her future.

Bilkisu is leaving her children’s fate in God’s hands, she says. She prays daily that she can be positioned one day to get her family off of the streets. “I don’t care about begging for money,” she expressed with a look of defeat in her eyes. “But it is my daughters [on the streets] that hurts me the most.”