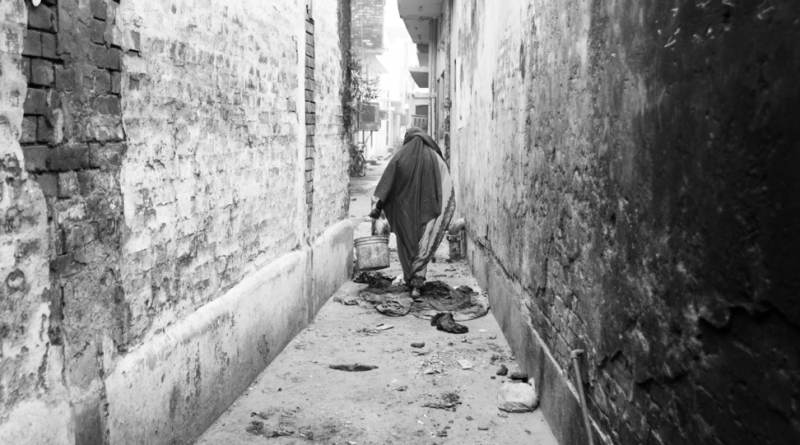 Op-Eds and Commentaries
July 29, 2020July 30, 2020 1162 Views India, sanitation, technology, urban
CS Sharada Prasad and Seema Thomas
CS Sharada Prasad is an Assistant Professor at the School of Development in Azim Premji University. Sharada completed his PhD from Energy and Resources Group at University of California, Berkeley, where his doctoral research focused on Fecal Sludge Management in urban India. Sharada continues to focus his research on social and political aspects of sanitation access and work in low and middle income countries.

Seema Thomas has been working on urban challenges for the past two decades as a sustainable urban development specialist, currently working as an Adjunct Professor at the University of the District of Columbia. She has a masters of distinction in urban planning from Harvard University, a masters of public affairs from Princeton University, and a bachelor of science in engineering, with honors, from the University of Pennsylvania.

While three-fourths of the world’s population has access to a basic sanitation service, only about half of the world’s population uses a safely managed sanitation service. Over the last decade, the Government of India has strived to increase access to sanitation, building 100 million additional toilets in rural India over the last five years under Swachh Bharat Abhiyan (Clean India Mission). However, in urban Indian cities, the challenge is less about access and more about the management of the waste generated by the toilets. Urban India has the infrastructure to treat only 10 percent of the waste generated in its towns and cities. The lack of technology adoption and the design of the existing infrastructure lends itself to manual sanitation work.

As connections to sanitary sewers and availability of mechanized pit emptying options are limited, manual servicing of sanitation systems (known as manual scavenging) is the only option for two-thirds of Indian urban households. Manual scavenging is a practice that involves human contact of excreta and requires people to manually remove human feces from a variety of receptacles, ranging from bucket latrines to septic tanks to drains and sewers, typically without the use of protective personal equipment. According to the Indian National Human Rights Commission, manual scavenging is considered to be one of the worst human rights violations, considering it be a “degrading practice… where the country should become from free of this pernicious practice”.

To address the issue of manual scavenging, India passed the Employment of Manual Scavengers and Construction of Dry Latrines (Prohibition) Act in 1993, banning the construction of dry latrines and related manual scavenging. However, rather than changing working conditions, this act forced manual scavenging work to become less formal, hidden from monitoring and regulatory agencies, thereby making workers more vulnerable. In 2018, a survey conducted by the Union Ministry of Social Justice and Empowerment across 18 states found that India still had over 20,000 manual scavengers. Furthermore, the survey found that one sanitation worker died every 5 days between 2017 and 2018.

An initial assessment by the World Bank, the World Health Organization, the International Labour Organization and Water Aid offers a framework for understanding the full spectrum of urban sanitation work along the sanitation service chain in India. At the user interface level—specifically, the toilet—containment (collecting the feces) is performed by sweepers, latrine cleaners, and cleaners specific to the sector (community, government and commercial). Women are predominantly responsible for the containment processes that do not incorporate technology. The next steps along the sanitation chain require increased use of technology, which are predominantly performed by men as men are the only ones who receive the training to use this technology, typically because they are seen as more capable. The next challenging step is the transportation of waste, which requires either manual or mechanical means. The process ends in final steps of treatment and end-waste disposal (assuming the waste is not illegally disposed of) using sophisticated technology by municipalities.

In India, the sanitation work that involves high levels of mechanization is far safer than the manual savaging because the technology reduces workers’ exposure to the harmful gases and pathogens present in the human waste. For instance, pits and septic tanks are emptied by trucks fitted with vacuum pumps, and sewer lines are again unblocked by trucks fitted with jetting machines, avoiding any direct contact with feces. Major cities such as Delhi and Hyderabad have implemented customized jetting machines that employ high-pressure water jets to clear blockages.  The new technology requires workers to have more technical skills, such as driving large trucks and operating machinery. Both of these skills are monopolized by male sanitation workers.[1]

Sanitation work in India has a broad spectrum. To capture the gender divide along the ladder 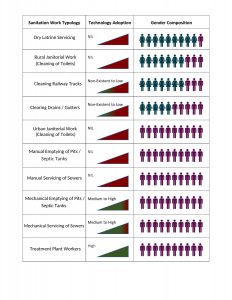 of technology, the table on the right describes the type of work and the corresponding gender asymmetry and the level of technology needed to complete the work. Similar to other fields, like agriculture and solid waste management, as the use of more sophisticated technology increases, the ratio/number of women involved declines.

According to a recent study by Dalberg, approximately 50% of urban sanitation workers are women. Typically, the female sanitation workers belong to the Scheduled Caste community, working predominantly as school toilet and drain cleaners. The Sanitation Workers Project highlights how “women’s entry into these jobs is compelled by the need to supplement or replace spousal income”. Further exacerbating the high health hazards, female workers frequently experience unfriendly and unsafe work environments.

However, male sanitation workers do work in dire situations. Deaths of male workers in the sewers and septic tanks of India are very common, causing little shock or outrage to society though they continue to make headlines. Typically, only one-third of such deaths get compensated; because of high transaction costs related to a large bureaucracy and rampant corruption, the compensation rarely reaches the widow of the sanitation worker. Often it is appropriated by a male relative of the deceased. If the worker was a direct employee of the city, his widow is offered a job related to sanitation work. Most widows take these jobs because housing is provided as an additional benefit for the family. In cities like Mumbai, many widows are forced to earn a livelihood as sanitation workers due to the high housing costs and minimal job prospects.

Recommendations for the Future

In recent years, movies and documentaries such as Toilet Ek Prem Katha, Pad Man, and Period. End of Sentence. have drawn public attention to lack of sanitation access and menstrual hygiene. However, those films barely cover the backend of sanitation – the cleaning of toilets and emptying of pits they are connected to. While Bollywood romanticizes movies on access to sanitation, Kakkoos, a 2017 documentary on manual scavenging, exposes the raw nature of India’s caste-based sanitation system. While Toilet – Ek Prem Katha ignores the agency of women and fails to shun the related patriarchy, Kakkoos stands as a testimony to the agency of a female Dalit director. Although “Period. End of Sentence.” won an Oscar, Divya Bharathi, the director of Kakkoos, faced threats and harassment from the larger society for creating the documentary.

The practice has deep historical roots in the occupational-caste system, in which the occupation of manual scavenging typically falls at the lowest rungs of the caste system, on the Dalit sub communities that are traditionally termed as “untouchables.” Though caste-based untouchability is unconstitutional in India, society continues the practice and stigmatizes sanitation workers. Additionally, due to the heterogeneity of urban areas in Indian cities and the tiny paths between homes and rugged terrain, manual scavenging continues to be a major form of feces removal from households to excavate in hard-to-reach places. Recent trends suggest that feces transfer can be increasingly made possible through technology solutions, reducing the likelihood of manual excavation, but these advanced sanitation opportunities almost always go to men, leaving women more likely to do the manual scavenging jobs in the most challenging locations. The recent mechanization of sanitation work in some of the Indian cities such as Delhi, Hyderabad and Bangalore is focused entirely on servicing sewered infrastructure and is carried out exclusively by male sanitation workers. Modernized sanitation work requires skills such as driving trucks and handling machinery that women are rarely encouraged to acquire. As a result, women are confined to cleaning public spaces and narrow alleys where trucks cannot reach.

Hence mechanization and modernization of sanitation work has become a new mechanism to further alienate and marginalize women sanitation workers and confines them to do riskier and degrading manual work.  Indian legislators and municipalities have not sought a nuanced understanding of these gendered issues in urban sanitation. Neither do they acknowledge the role of women in sanitation work nor do they consider women while designing technology-based sanitation solutions. As policymakers and other decision-makers continue to espouse policies to minimize the manual nature of urban sanitation, they must pay attention to the consequences of technology, specifically the unintended impact of technology on urban female sanitations worker in India. 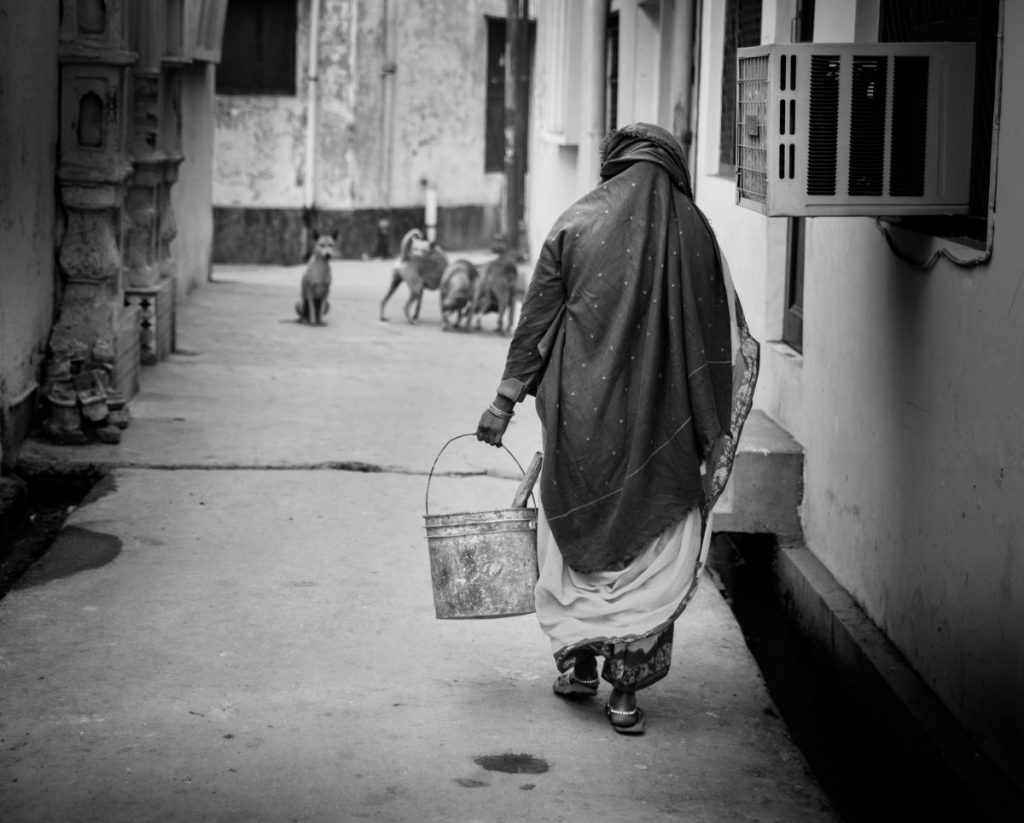 [1] However, it’s important to note that there are still numerous hazardous conditions, regardless of whether the work is mechanized. While workers are workers are provided with coveralls, reflective jackets, masks, gloves, and boots, masks are mostly dust masks that do not provide any protection from harmful gases; gloves are of low-quality material that tears within a few hours of work; and boots are gumboots without steel toe protection. Furthermore, the coveralls are not designed to ventilate during a 110 degree  day in summer.